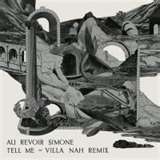 Apparently this has been out a while but I admit I have neglected the psb web site for a while ( sorry Neil!)
Any true psb fan ( and New Order fan) would go WOW to know of this song. Chris is doing full vocals , yes sung vocals on a New order track, 'subculture' , produced by Swiss DJ's /producers ' Stop modernists'. Wow!
The PSB's have a close connection with New order, musically and historically. They of course collaborated with ' electronic' , consisting of Neil, Johnny Marr and Bernard Sumner in the 90's.
Chris famously has rarely done vocals except for the odd well placed line or lesser know vocal in  some tracks (shopping, paninaro, we all feel better in the dark etc)

This is a tough one for me to judge. I love PSB, (I've met Neil) and I love New Order, (  I've chatted to Peter Hook online) but  I know nothing about the Stop Modernists.  More importantly, I love the classic track ' subculture' by New order. One of its clever features was the very slightly out of time bass line that gave it that unusual disjointed hard edge associated with Manchester indie music at the time. It's got that angst of teenage life in the 80's , from the brilliant album 'Low Life'.  A very, very, New Order track from a very very New Order album. I remember playing this as a teen really loud in my bedroom. I had the white box cassette album with the cool semi see through plastic postcards! I still have it.

stage 1: OMG! Chris doing a New Order track! Brilliant. Love it!
stage 2: Hmmm, It's not as good as the original
stage 3: Actually, Chris is so good on it,  it's very good!

I think the music could have been more detailed, sorry Stop Modernists. It is a great groove but it's not got the depth of the original, but then again, that leaves room for Chris to take the track totally over and make it his. (maybe deliberately?) So I am at odds on how to judge it really!

Chris is the perfect person to do a cover of this song, no doubt about that. He has a charisma and edge that totally justifies it. I can't think of anyone better to do it. His voice is not a singers voice, yet he proves here he can sing in tune and with a great tone too. His best vocal yet, but he has a hidden emotion behind it.  It's more than what you get on face value, which is what the PSB ( and New order to some degree) do so well. 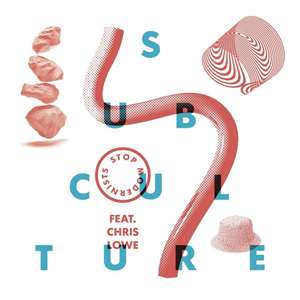 click for Subculture on You Tube
Posted by ant at 00:58 No comments:

Recently I updated my version of Reaper (3.78) up to the latest version (4.0) which has now already been updated to v.4.02 with a couple of small tweaks.

For those that don't know, Reaper is a free to use, fully functional music workstation, similar to that of Logic (mac only) and cubase etc. The main difference being is that they kindly give you the full fully working version, totally unlimited for free. The only catch being that if you use it commercially in any way then you need to pay the appropriate busines licence (still very reasonable) .
.
I am going to give a quick overview of the main page to show some of the visual updates that have been made since v3.
There are a whole load of technical and functional improvements (key updates listed below) But I am focussing on the basic visual improvements of the user interface / main page.

Previously you could add colour to the tracks but the basic feel of the program was dark green / grey and black. lots of black. ( grim reaper...) All very well but it was a bit depressing to look at, and very angular and square.
The new version still retains some of its trademark darkness and black but used more carefully and everything is now just a bit more funky and curvy.
Think of it as comparing windows 7 to windows 95 or a new ford focus to a model T
its a bit like death has discovered neon lights and disco for the first time

This is the tool box, previously 95% grey on black, now all neon. The same icons are there but they have been updates to be clearer and curvier.

The track control bus is lighter and clearer, slightly redesigned. You can of course still change the size and placement of most panels.

One of the nice features they have kept is the manual or random colouring of tracks to keep things clear  and organized  (and prettier). They also have now added a whole bunch of nice icons you can add to each track to label the instrument or input being used. This is now really easy to do. 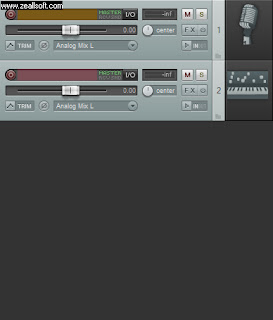 The master mix and track mixer panel is one of the more obvious updates. It is so much clearer and brighter with easy access to the main functions. The record button being very easy to hit now. ( I never bothered with it in the previous version, I used the button record on the track fader)

I really like how they have visually improved v4 over v3. It is not just to make it look nicer, it actually improves the clarity of the whole main screen immensely.
It feels like you are almost using a real hardware desk as its so clear.

Automation (Trim) is also a lot easier to find and use.

A massive improvement
check the program out here:http://www.reaper.fm/

PS , I previously had the 'small business' license for v2.00 up to v3.99.
This is currently only $60 for the new version
I will get this if I release any music for sale through v4+.
The software is totally free for home use but if you sell any of your work for profit / business you must get this license. :-)
Posted by ant at 11:09 No comments:


21 by Adele.
My wife likes listening to Adele (single) after work so it must be good ;-)
I hope to get hold of a copy and will review it soon if possible.

If you have it / have heard it, please send me your views on it
Posted by ant at 20:58 No comments:

Email ThisBlogThis!Share to TwitterShare to FacebookShare to Pinterest
Labels: Adele

Soundtrack for 'The most incredible thing' by The Pet Shop Boys

Review of the Soundtrack album for The most incredible thing by the Pet Shop Boys.

First of all let me make two things clear. 1) I am a massive PSB fan and have almost everything they released. 2) I went to see the show a couple of months ago as a treat for myself and my wife. We went to the final night with the best seats and saw Neil and stood next to  David Walliams having a drink at the interval. We loved the show, the venue (Sadler's Wells), the music and the whole visual experience.

As a show and a modern combination of Art, Film, Dance/Ballet and music it was perfect, and thats my slight problem with the CD. The music is great but it was never designed to work alone. Their previous soundrack album Battleship Potemkin was for a silent film so had to portray a lot more of the story and as an album works fairly well on its own without the film. Much of this latest cd however is lost without the visuals and story telling that went on onstage.  There are some very nice moments musically such as the upbeat Ten Commandments and The one moment you hear Neil sing in a pastiche pop song of the show which was really fun too see. There are great Eastern Blok influences in the music and some nice quiet moments too. Some of the music reminded me of Stravinsky in its complex rhythmical, almost atonal and never quite resolving nature. The music is great and up to its usual original and unique standard but is missing the rest of the experience. I would suggest waiting until it becomes availble on DVD, however as the show was so successful it is to be re-run next year, you may have to wait a while yet for it to be available. The music and orchestration are fantastic. Go see the show!

I want to give this album more but it is rather lost without the live experience, I give it 6/10 as a cd. 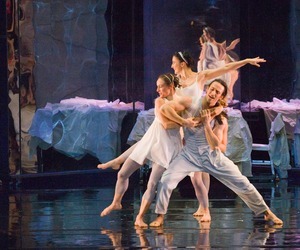 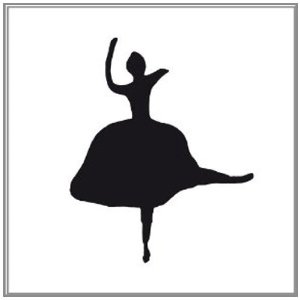